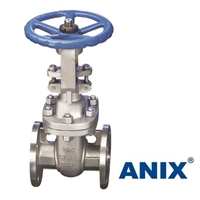 Anix Valve USA is a valve manufacturer based in Houston, Texas. Find out about our wide selection at https://anixusa.com/gate-valve

What is a Gate Valve?

Gate valves are used widely for different applications and are suited for both above and below ground installation. The function of the gate valve is to either open or close the path of flow, depending on the position of the stem. It has a very distinct feature: it has an unobstructed passageway which leads to minimal pressure loss over the valve. With this design you can even use a pipe cleaning pig.

Fundamentals of a Gate Valve

The main components of a gate valve are body, seat, gate, stem, bonnet and actuator. How it works is by either turning the gate valve clockwise to open or counterclockwise to close the flow path, which rotates the stem. The stem turns a gate that will fully block or allow the full flow, but it does not control the flow. Gate valves are considered to be multi-turn valves, since you have to turn it more than 360 degrees, to either fully open/or close the valve. When gate valves are fully open then they are full bore, which means the gate and pipeline both have the same opening so nothing can stop the flow from going through.

Gates are either done manually, by fully turning the handwheel to let the flow through, or done by an actuator, which is controlled by a computer system which dictates when the actuator should work.  Also, depending on which stem is threaded, it will be a rising or non-rising one. One type of valve, an outside screw and a yoke are considered as rising stems.There is a nut that revolves around the threaded stem which moves the stem making the gate rise or lower as it spins. A non rising stem is affixed to the actuator and threaded to the gate. The actuator is a separate piece, a modification that you put on top of the valve where the threaded stem starts. But to do this the hand wheel and the drive nut needs to be removed, which will expose the threaded stem, allowing the actuator to move up and down, like a pump.

There are 3 types of gate valves depending on the disc size, the solid taper wedge, flexible wedge, and split wedge, or parallel disks valve. A solid taper wedge is the most common out of the 3 and mostly used due to its simplicity and strength. A solid wedge can be used in any position, and is suitable for almost every type of fluid, though this type of disk design is prone to leakage, due to the seat alignment and to the pipe loads and thermal expansion. This design is widely used for moderate lower pressure temperature applications. A flexible gate wedge is a one-piece solid disk with a cut around the perimeter. Since it is narrower and shallower, the perimeter on the wedge gives less flexibility and retains strength.  Due to its design, it will get less leaks going through and perform best when thermal binding is possible. They are more widely used in steam systems. The only disadvantage is that line fluid gets stuck to the disk, which can result in corrosion and potentially weaken the disk. A split wedge has 2 solid disks that hold together with a special mechanism, in case one wedge is out of alignment the other wedge could still hold up the disk. They are spring loaded which means it keeps in contact with the seat and gives bi-directional dealing. It's used for handling non-condensing gasses and liquids at normal and high temperatures. But the only problem is when the fluid gets heated, it can't create thermal binding.

There are various materials used such as carbon steel, cast iron, ductile iron, gunmetal, bronze, alloy steels, stainless steel, and forged steels. Brass and pvc are most commonly used for plumbing services. The material designed for each one depends on the what type of fluid and the temperature.